So it's my 14th day here in Paris (only 14 days, really?) and the initial Paris afterglow is wearing off.  The reality that i've committed 4+ months of my life to living in a foreign city is starting to set in. I've been having some issues with the living situation with my host madame, but I talked to the housing agency that placed me here and they've found another family for me so hopefully this issue will be resolved soon. One thing that has has a surprisingly large impact on my life here...the weather. It's...definitely not what i'm used to. The cold I can (somewhat) handle, but the constant lack of sun is starting to take a toll on me. Part of me wants to google a tanning salon just to get some UVA/UVB rays up in here. I know that i'm adjusting to culture shock. In fact, according this handy-dandy little chart provided by the USC Office of Overseas studies, I'm entering the phase of culture shock called "The Plunge":


I'm feeling a bit better about Paris and living here than I was 2 or 3 days ago, though I still have some small complaints (why must I block out 2 hours of my life each day for lunch? ) so hopefully I've already passed the trough and am heading toward an upswing. It's tough explaining how I feel to anyone because all they hear is the word "Paris" and their brain shuts off during the rest. Even though they many not always understand, this experience has definitely made me realize how wonderful my friends and family are, and I thank them so much for keeping in contact with me, it means so much.

To try to kick "The Plunge," I forced myself to get dressed and go out. I headed toward my school in St. Germain-de-Prés hoping to score a cheap lunch at one of the CROUS (gov't subsidized cafeterias for students). To my initial dismay, it was closed, but I decided to use the time to walk around and photograph some of the cooler sights near my school: 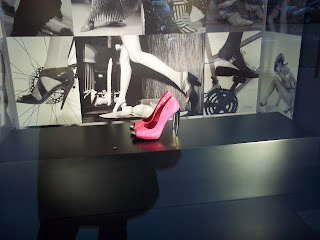 After hanging out in St. Germain-de-Prés, I decided to head over to La Défense, la cœur of business in Paris. It's like Downtown LA was a few years ago in that outside of office hours its pretty much deserted, which made for some interesting pictures: 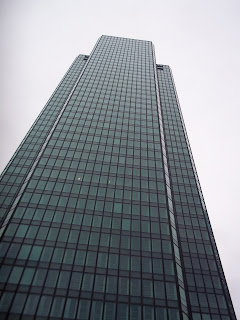 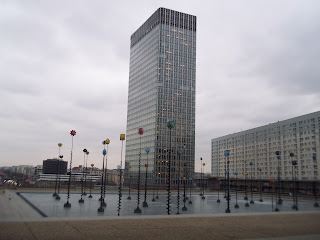 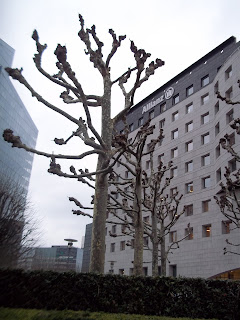 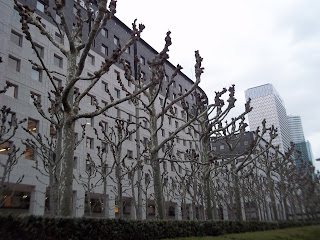 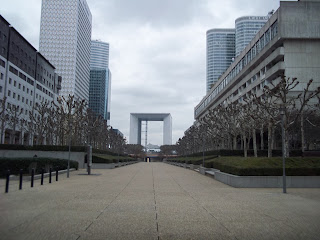 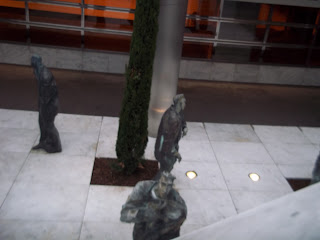 Long post, but I go through all of this to say: you can't keep a good Zee down. No amount of crappy weather/ unfriendly Parisians/ maddeningly formal and unnecessary protocol will EVER accomplish that.

Anyone who knows me fairly well knows that I love movies. It's not exactly a secret; I can find a way to incorporate the plot of a film into just about any real-life example you can come up with. I keep some of my favorites with me in my apartment at USC...movies like Gladiator, American Beauty, and Bring it On (hey, that's a classic too) and Marie Antoinette. Marie Antoinette, directed by Sophia Coppola, is not a particularly good film, but it is a beautiful film, a feast for the eyes. The palace at Versailles, the beautiful dresses, and the ornate food set the perfect scene for opulence and decadence. There's an awesome "shopping" montage in which Marie Antoinette (played by Kirsten Dunst) and her friends try on shoes and get fitted for dresses while eating some incredible looking deserts. I did some research and found out that the patisserie Ladurée provided the pastries for the movie and that their famous macarons inspired the color pallet for the entire film. Of course I had to go, and today I finally did. It turns out that one of the locations, situated on Rue Bonaparte, is super close to my school in St. Germain-de-Pres. I decided to try out the St. Honoré, a cute little pastry that is dedicated to the patron saint of bakers. 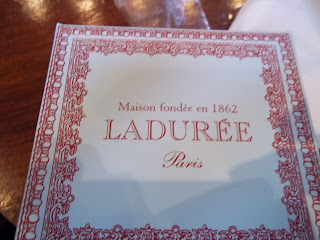 It was pretty darn good. I was hoping they'd have fraise or framboise flavor for a pop of color, but the traditional St. Honoré, which is caramel and vanilla flavored,  was definitely not a disappointment.

Simply put, the metro system here in Paris is amazing. Not that I have a whole lot to compare it to (other than Washington, D.C). Even still, it gets very high marks for being user-friendly and for it's comprehensive system of stops located at all the major pulse points of Paris. The metro is also a treasure trove of hilarious ads. The movie ones are the best:
This ad, which is for the movie "Alice aux Pays des Merveuilles" or Alice in Wonderland, hypes up the fact that Tim Burton directed the flick by putting the poor white rabbit in Edward Scissorhands garb, a reference to an earlier Tim Burton movie of the same name.

The only downside to the metro is that it stops running at 1on weekdays and 2 on the weekend. Every night, I feel like Cinderella trying to get to her carriage before midnight, or in my case the metro stop before 12:30. I'm sure I don't have to point out to most of you that this cuts into prime partying time. Once I figure out how to use the Noctilien, or the Night bus, I'll be able to stay out longer.

***
Previous to Paris, I had never had a macaron. I knew they sell them in Lemonade on USC's campus, but I didn't even really know what they were until I mistakenly called one of them a cookie in front of a friend. He looked at me, mildly horrified, and said, "Azeezah, it's a macaroon." Oooh. For those of you who, like me, are not up on your pastry knowledge, macarons (or "macaroons" if you prefer) are an outer shell of typically almond meringue filled with a typically fruit-based ganache. There are many, many different flavor combos, including a range from dark chocolate to pistachio. Pictured above, un macaron framboise or raspberry macaron.  So now I have finally eaten one, in the global capital of macarons, no less. They are more tasty, more delicious, than I could have ever predicted. I hate it when people liken food to sex, but I feel that here the comparison may just be apt. It has exceeded my expectations and more. Hello, new addiction!
Posted by Zee at 8:13 AM No comments:

I started this blog as a way to chronicle my adventures in Paris, but when I got here I got so caught up trying to explore and matriculate into my host university, Sciences Po, that blogging got put on the back burner.  In fact, the only reason that i'm sitting here posting  now is that I cut my foot running along the Seine last night trying to make it to the dock before me and my friends got left by the croisière (boat cruise). Now that I have the time to lay down my thoughts, I find that they're-for the most part- jumbled up, out of chronological order, and lacking any type of connecting theme. I figure i'll just get the ball rolling with the obligatory : "Hey-guys-look-at-me-in-front-of-the-Eiffel-Tower!" pic: 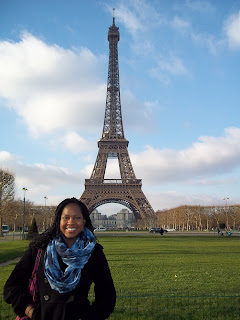 A rundonwn of some of the more touristy things i've done so far:

In terms of actual Parisians, I haven't met any yet, other than my madame, but then again I spend most of my time with the people I've met during welcome week, who are also foreigners. Or "furriners" as my Australian friends say when imitating an "American" accent. I did, however, meet a very nice french boy in the cyber cafe beneath the main building of Science Po who very graciously showed me how to use the coffee vending machine (America-get on this). He was from a town on the western coast of France called Bretagne, and it was amazing how a) he knew right away that I was American and b) how good his English was in comparison to my French. A little envy-inducing to be sure. I think it's interesting how whenever I open my mouth, pretty much all Parisians know I'm from the US. I'd be sad that my French accent is so unconvincing, except for the fact that apparently guys here like girls with American accents. Who knew? I know I certainly like guys with french accents... ;)
Posted by Zee at 8:11 AM No comments:

This is my first official post from Paris! It's my third day here, dimanche  (or Sunday), and I figured since everything is closed I should take a short break from exploring to try to capture some initial impressions. Sunday, by the way, is the day when Paris basically shuts down. All except for the Champs Elysee, due to all of the touristy stuff. My "madame" suggested that I go on a promenade down towards the Arc du Triomphe, which is a stone's-throw from my homestay apartment, I see it everytime I go to the metro (which, granted, has only been one time so far). Some initial impressions of Paris:
Anyway, I'd like to write more, but I am compelled to explore. Armed with my camera, which i just purchased from an "fnac" store here because I lost mine at home, out i got into this lovely Sunday!
Posted by Zee at 5:46 AM 1 comment:

An American Hipster in Paris

"You're wearing THAT?..." My mom says to me, I can hear the disapproval in every syllable. I look down at the oversized flannel shirt that I'm wearing, a red and blue plaid patterned button down that my dad used to wear. "Yeah," I reply. "I wear this shirt in LA all the time. I love it." "Well..." she replies, "THIS is not LA." I scoffed at that and wore the shirt out anyway, edified by my belief that personal style should not be stifled by location. As I pack this morning for Paris, however, I set the flannel shirt aside in my "maybe" pile before putting it in my luggage. From all the advice articles I've read about living in Paris, the majority say that to have the best experience possible, Americans must try to fit in and look as "Parisian" as possible in order to avoid ill-treatment. This goes against my personal philosophy: if I'm from America (which i am....duh) I should be able to embrace that wherever I am, instead of being forced to conform to local styles of dress. At the same time, however, I will be living with a french family, far from any friends or family of my own, and it's important that I fit in in order to have a good experience. Maybe it's time for me to..dare I say it...conform. Not for anyone else, certainly not for any judgy Parisians, but just to fully embrace the experience...* I'm typing this blog as I pack for my flight to Paris which is in just a few hours. I'm so excited, and SO READY to embark on this adventure of a lifetime. Thanks so much to all my friends and family that believed in me and supported my dream! I look forward to posting again from gay Paris!

*I'm still bringing the flannel shirt though ;)
Posted by Zee at 2:53 AM No comments:

It's official! Only two more weeks until I fly from my hometown to DC, and from DC across the Atlantic to the beautiful Paris, France. I'm in the home-stretch of my "Paris prep"...today I went to my bank and bought some Euros. I tell ya, there's nothing like an unfavorable exchange rate to remind even the most patriotic American that we aren't exactly dominant in all things anymore...The glory days of getting cheap designer goods abroad that my mom tells me about definitely gone, at least for now. Even still, nothing can damper my excitement!