Sorry for being so remiss in my posting...my laptop adapter died and I didn't use it for a few days until I finally decided to cough up the 79 euro ( a lot more than 79 US dollars) to get another one. I'm paying for my stubbornness/cheapness though...it's taken me approximately 15 minutes to type 2 sentences because I've basically forgotten how to type on an American keyboard...

Anywho, spring has definitely sprung in Paris, and I for one couldn't be more pleased. I was emailing a friend of mine about Paris and mentioned how hard the winter had been for me, and he pointed out very astutely that living in South Carolina and Los Angeles for my entire life had given me little to no preparation for a "proper" winter.Spring has traditionally not really been a big deal, but here in Paris for me it really has been a rebirth. Just seeing the sun again on a regular basis means so much...
Last weekend, students from the other Sciences-Po campuses around France came to Paris to check out the school and to sight see around Paris, and I signed up to go on the outings in the hopes of meeting some friendly French students. We went to the Château Versailles on Saturday and the Eiffel Tower on Sunday. While waiting to meet the rest of the group to go to Versailles, Lindsey, Leah and I decided to indulge in a school sponsored dégustation, or wine tasting. This was my first wine tasting, and I must say, I felt très classe. We learned about what it means if the wine is "crying"after you swirl it around in the glass (high alcohol content or something to that effect) and how there are a lot more words in french to describe wine than in english. It didn't hurt that some of the guys giving the serving the wine were pretty cute. After some shenanigans involving being left by the rest of the group, Lindsey, Leah, myself, another American student and two nice Russian girls ended up making our way to Versailles. It wasn't very spring-like...pretty cold actually, but hey, it's still Versailles!

French Guy Leading the Group- "How did you like Versailles?
American Student- "Oh it was really grand and fancy..."
French Guy- "It's French"

Sunday was the Eiffel Tower... 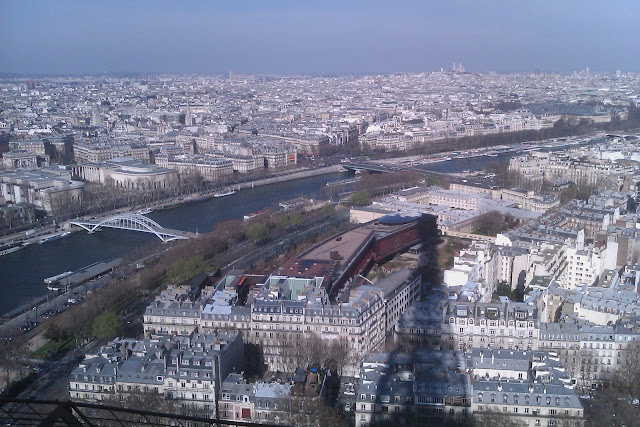 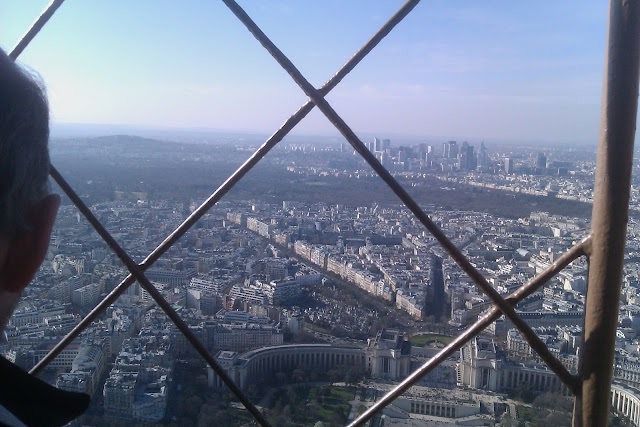 Two main touristy things gotten out of the way in one weekend. And on the Sunday that I went to the top of the Eiffel Tower, it was magnificently sunny. It made the Seine glitter like a platinum ribbon running through the city. Through the exchange I met a French girl who totally defied the typical stoic cool-girl stereotype that I had in my mind up until then. She regaled me with tales of going to Drake concerts and dancing in hip hop clubs near her university. All in all, a pretty cool weekend, full of surprises and new experiences

I finally have the strength to chronicle my impressions of that most wonderful city, Barcelona, after arriving back in Paris on Wednesday with what morphed into an epically wicked cold. Isabelle F. (Not to be confused with Isabel E.) and I flew from Paris on Friday to celebrate our spring break in Barcelona. I still remember sitting in front of my laptop on a gloomy Paris winter's evening and checking my phone to see a text from Isabelle: "wanna go to Spain for spring break?"  I had thought about going to cities in Spain, London, Berlin, Vienna..even cities in France. The ideas never stuck though, in large part due to the precariousness of my living situation in Paris... never knowing when the housing agency was going to tell me that they had found me a new homestay and that I would be expected to, once again, pack up all my belongings and go to some random apartment in Paris.

In a typical Zee-impulsive fashion, I said, "sure, let's do it". I just knew that I desperately needed to get out of Paris. The weather was awful and some of the attitudes I was getting from Parisians were even more awful.I desperately tried to cling to pleasant things and to enjoy the experience...but it was getting more and more difficult as pleasant things about Paris were starting to get fewer and farther between. In particularly low moments while I was waiting for the metro after being unceremoniously jostled by Parisian worker drones in fashionable black wool coats, I fanticized about stepping off the platform in front of the oncoming train (just kiddingggg)

Did I know Spanish? No. Did I know Catalan? Heck no. Could I even find Barcelona on a map? No. I had, however, seen the Woody Allen movie Vicki Cristina Barcelona, which had ever since left me with a burning desire to visit the city. Research could be done after I booked the flight, I figured. From the moment that we landed I knew that it was going to be a great spring break, simply because I saw something beautiful that I hadn't seen in a very long time: the sun. Oh beautiful ball of burning gasses, how I had missed you! The landscape, the plants, the weather, all reminded me of my beloved Los Angeles. Both have a mediterranean climate, both are surrounded by both mountains and beach. Both are urban but still chill and laid back. The hostel we stayed in was small and clean and in a cute residential area near a church, whose bell you could hear through the windows in the morning.

Isabelle and I packed in all the major attractions Barcelona had to offer in about 6 days: The beach, Las Ramblas, Sagrada Familia, Parc Güell, Pueblo Espanya, The "Magic Fountain", The Picasso Museum,The Gaudí houses of Casa Vicens, La Pedrera and Casa Botillo, and the awesome nightlife scene. As we moved about the city, I realized that I actually knew a lot more Spanish than I thought I did, and a lot of what I had been teaching myself over the summer a year ago came back. I found that I actually wanted to learn Spanish because the people were much more pleasant to talk to, and I wanted to talk to them, rather than avoid them (cough*Parisians*cough). Isabelle graciously translated on my behalf as well. It was a great learning experience as well, I got to try a lot of cool spanish foods like patatas bravas, bocadillos and paella verduras (paella for vegetarians!). Spain is now my new favorite place on earth, and it's more of a matter of when rather than if I plan on returning.

It was the perfect trip at the perfect time...my only impression of Europe had been of Paris, and I was beginning to think that perhaps Europe was no place for someone like me. It really helped me put things in perspective, and to try to come back to Paris with a fresh approach. When I returned to Paris-surprise, surprise- it was sunny! Almost as if the city was coming to me like an ex-boyfriend: I'm sorry, I know things didn't work out earlier, can we try again? See, i'm not so bad...i can change.  As I sit next to my window in the student dorms, I look out onto the park on top of the viaduct and see-can it be?- yellow and pink buds on the bushes lining the walkway. Yes, Paris, I think I am ready to give "us" another try...
Posted by Zee at 12:11 PM No comments: