Le Conseil d'État and the ICC

For those curious as to what I'm up to when I'm not sipping on café crèmes au terrasse or visiting yet another museum, I though it would be good to post a lil somthin' somthin' about some of my more academic/professional-minded pursuits here in Paris.

As I've mentioned before, I am completing a dual-degree program offered by my home law school and Sciences Po. It's been a bit of a departure from the free-wheeling days of my undergrad exchange: I have the full course load instead of the minimal credits required of those only doing a semester. The cons are, as you would expect, more time in class and the increased amount of homework that comes with more classes. The pros are a more "engaged" learning experience and better relationships with my comrades in the masters program.

In addition to classes, I have had the good fortune to visit important legal institutions here in France, such as the Conseil d'État and the International Chamber of Commerce (ICC) headquarters.


The Conseil meets in the Palais Royal building (I'd always wondered what the "Palais Royal" of the Palais Royal/Musée du Louvre metro stop was...). The Conseil holds weekly seminars in which legal scholars discuss various cutting-edge developments in the law. I went with one of my Sciences Po professors, on an occasion in which two of her former students speaking on the panel (out of 3 panelists, not too shabby!). The topic at hand: extraterritoriality and movement of persons. 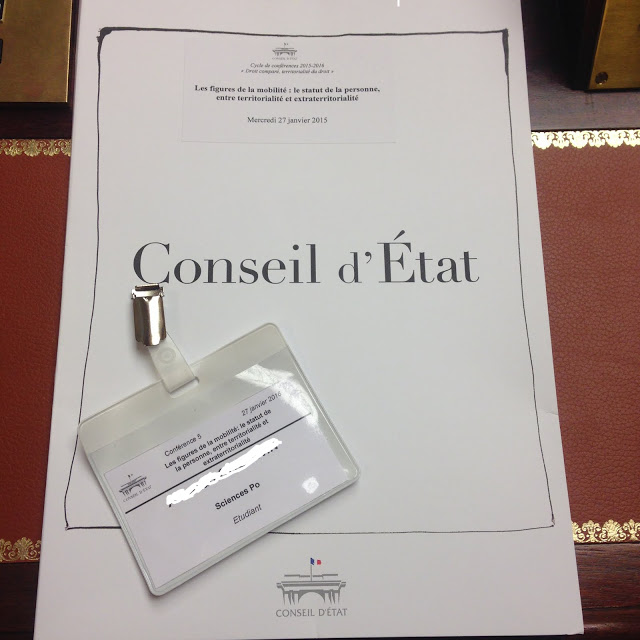 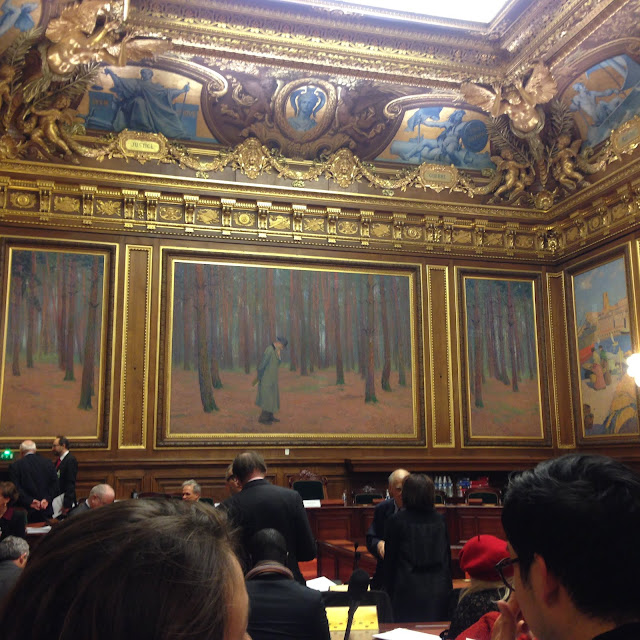 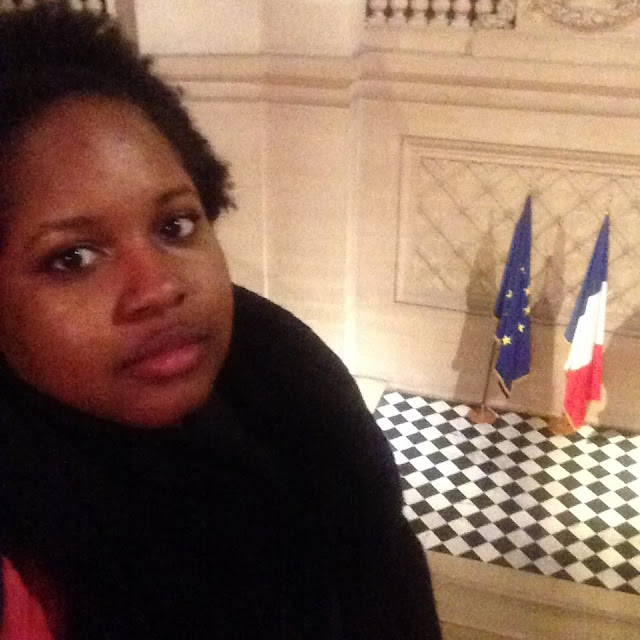 Yesterday, I had the great fortune of having a private tour of the ICC headquarters, which are located a stone's throw away from the Eiffel Tower. I am very interested in international arbitration, so it was great to visit the place where the case management happens for ICC arbitration and to meet some of the members of the various regional teams. 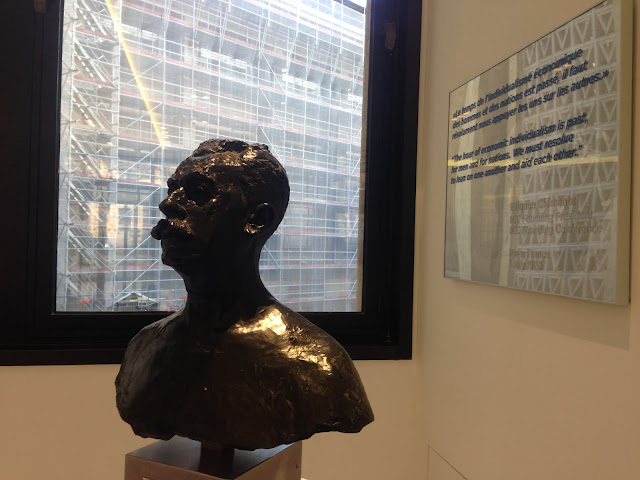 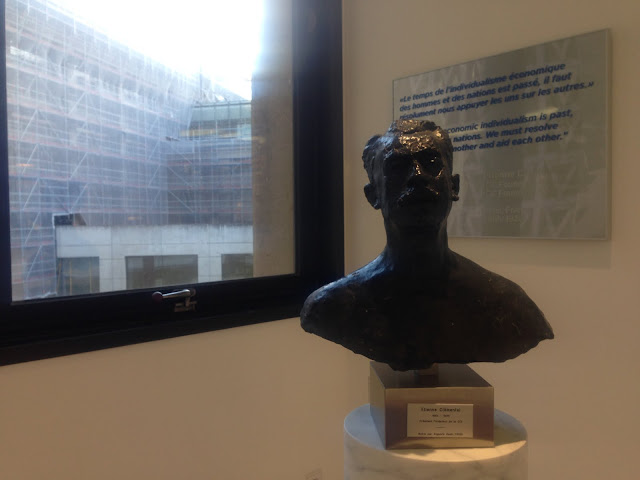 Soon, I hope to visit l'Assemblée National (the french national assembly), and I'll be sure to include lots of pics when I do! À bientôt!

All Up In Berlin

I have started this post about a million times in the past several weeks, but I've yet to finish it. I think part of the reason is because my trip to Berlin was really–at the risk of sounding hella dramatic–profound for me, and it has taken a while for me to really digest the experience.

First off, for those of you who, like me, don't have an acute sense of European geography above a London-ish latitudinal level, Berlin is all up in Germany. Like, you're basically in Poland, and you can see Denmark from your house. I'll post a map:
It's crazy b/c it's not that much farther east than like, Milan, but it feels super far east. I flew into the cheapo airport (Schönefeld), which was fine on the way in, but I would't recommend at all taking it on the way out, as it is super crowded with essentially no seating. Like, at one point I was parked cross-legged on the floor as old women dragged their rolling suitcases over my feet. Not fun.

I was staying with a friend from college which made the experience 1,000x more "authentic". For example, after I landed, I went to meet him at an concert he was doing with his choir in a performance space that was converted from–what else–a warehouse. In Berlin, though, when buildings are made from repurposed warehouses, it's rooted in an ethic of utilitarian efficiency, not kitsch (unlike some other cities which I will refrain from mentioning here). The warehouses serve as a link to Berlin's fraught history, physical reminders of a much harsher time. My friend's choir wore all black, and the performance was a mix of spoken word, dance, and singing. This performance was a fitting entrée to my time in Berlin: the hipster paradise you've heard that it is. Everyone is an artist/dj/filmmaker/etc. and they live in spacious, joke-rent apartments that you'd gnaw your arm off to have in NYC or London . Working more than 3 days a week makes you look like you're a go-getter, or essentially, trying way too hard. Even with the euro, prices are really low, which mean you can turn your bohemian fantasies into a reality without truly being a "dirty" hipster (so 2004).

I had a lot of work to do during my time there, which was such a weird contrast to the general "vibe". Some days were spent almost entirely writing about Latin American legal systems while looking out at the metallic gray of winter Berlin skyline. I still managed to hit up Berghain twice in one day, though, so don't cry for me, Argentina. Coming to Berlin was like a weird sort of Zee Through The Looking-Glass experience of what my life could have been like if I had lived the way I'd fantasized about young adulthood when I was in college. There was definitely a palpable energy, a sense that the city was a sort of cradle of civilization via art, a Mesopotamia for young creatives, if you will. Part of me couldn't help but wonder if I wasn't just seeing a sort of "Berlin bubble"; how long could such cheap rents last, after all? Global trends suggest not very long. In any case, I'm glad I got to see Berlin for myself after hearing so much hype.

I went to two christmas markets (weihnachtsmarkt) and I have to say, they were both probably the highlights of the trip for me. The first one I went to was a Nordic/Finnish themed one with my friend and his husband, and the second one I went to myself in Mitte.

Going to Berlin meant encountering lifestyles, a language, social tensions, people etc. which frankly were foreign to me and on some level made me uncomfortable. That said, I really feel that I have benefited by being forced to confront some fears and discomforts about myself and my own lifestyle that I'd been projecting onto others. I can't say how, precisely, but I do feel oddly changed after this trip, and I believe it's for the better.