I've just finished Welcome Week, and I must say, it's good to be back at Sciences Po. Such a beautiful little campus. 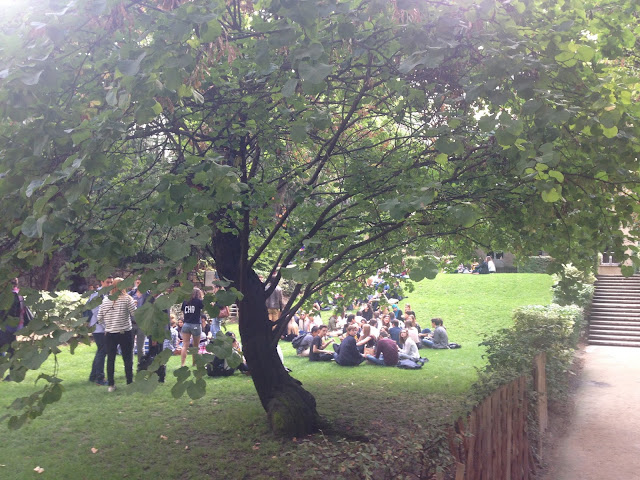 The last time I came to Sciences Po, I arrived in January. It's a nice change to begin the term in the summer while everything is still green and in bloom.

After the end of Friday's activities, I went to Café de Flore with a girl from my program. I've walked by Café de Flore and Les Deux Magots-two of Paris' most well-known cafes-more than a few times, but I'd never stopped to have un café because the prices are somewhat steep. But it's all about the ambiance, and the unmatched people watching...right? Might as well try it. 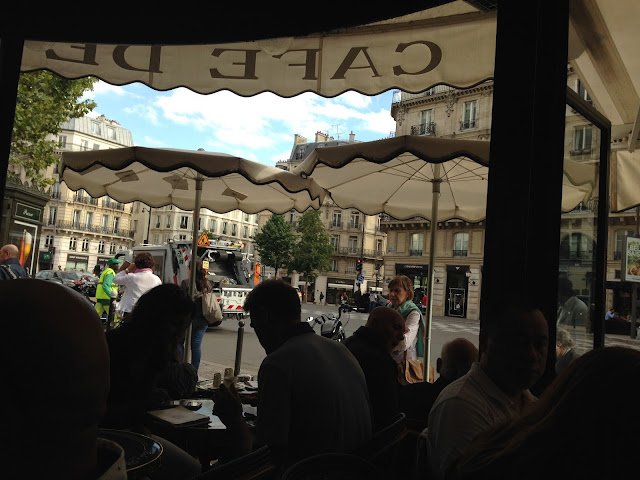 In Paris, I've learned after some mildly embarrassing personal experiences that you have an idea of where to sit at a cafe for food or for a drink based upon the table setting. A bare table is for a drink, tables with silverware/menus/paper coverings are for ordering food. At Café de Flore, they have these amazing table coverings with an intricate drawing of the cafe surrounded by all of the hustle and bustle of Boulevard Saint Germain. I asked our waiter for one to take home, and he was nice enough to oblige me.


On Saturday, I just took care of some things around my neighborhood. Its so cool to randomly see one of the mini-towers of St. Sulpice down a street and think, woah, I live here... 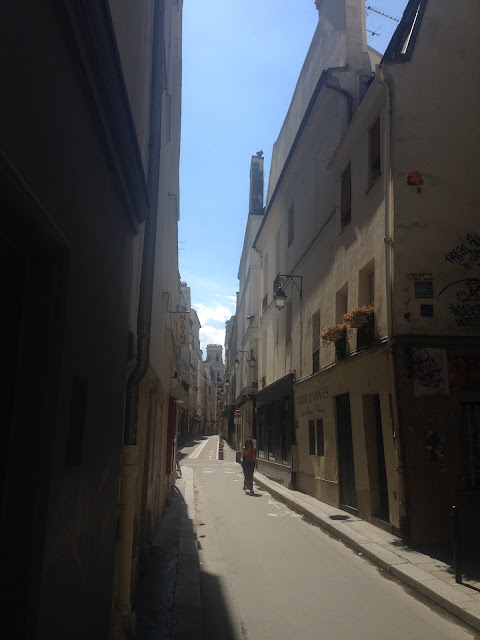 I haven't indulged in the make-your-own macaron bar yet; trying to prolong the onset of any sugar-related illnesses I may be due for for as long as I can...

I decided to hit up the Le Bon Marche to see what all the hubbub is about, but I got there too late...although the website said that it would be open until 9pm (21h) and I arrived at 8pm? Ah well, another time. On the way there I saw a man cutting up a bunch of lavender on the sidewalk and it smelled amaaaazing:

I also got to stop by the little garden next to Le Bon Marche and see the adorable little families playing games and having evening picnics. 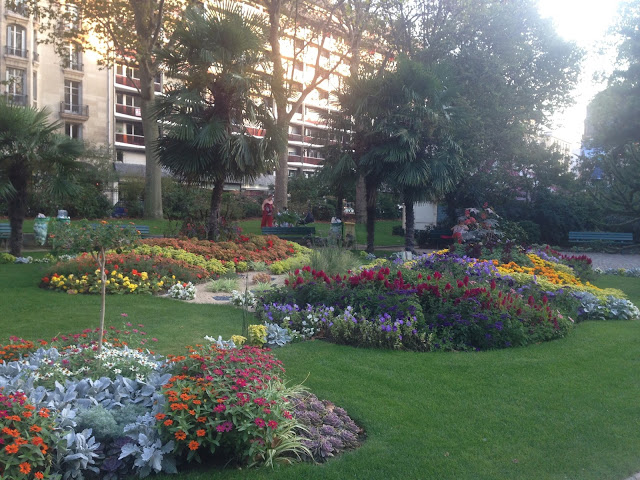 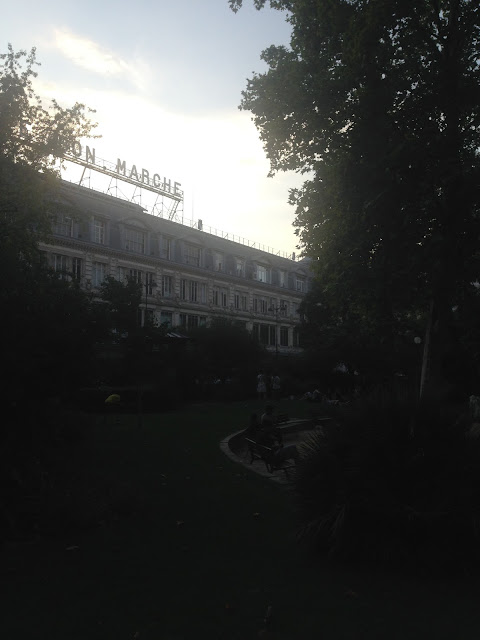 Fun fact about Le Bon Marche: it has been credited with advancing women's rights in France by providing women with a safe space to work at a time when the bulk of employment opportunities for women consisted of either being a domestic or a prostitute. Le Bon Marche was the world's first "grand magasin"; up until it's inception, clothiers would visit the homes of well-to-do customers to show them their latest goods and to fit them for pieces. Le Bon Marche was viewed as being a store for the people, by the people..."a temple of commerce", as Emile Zola put it. Though now it's hella expensive. #irony.


Today, I attempted to go to the medieval town of Provins for a harvest festival with Hannah, a girl in my program, but I didn't realize until I got on the train that it was under construction and wouldn't take me all the way to Gare de L'Est. I definitely got some PTSD-esque flashbacks related to trying to get into Manhattan from Williamsburg on weekends on the L. My original plan foiled, I decided to go to my second-favorite Parisian neighborhood: Le Marais.

I had some time to kill before L'As du Falafel opened for the day, so I did some flaneuring around until I found this gem of a park: Jardin des Rosiers-Joseph-Migneret. It's huge, and it has a garden full of fruits and veggies. Super cute. I don't remember this being here during my last visit, and the sign seems to indicate that it was reopened to the public in 2014. 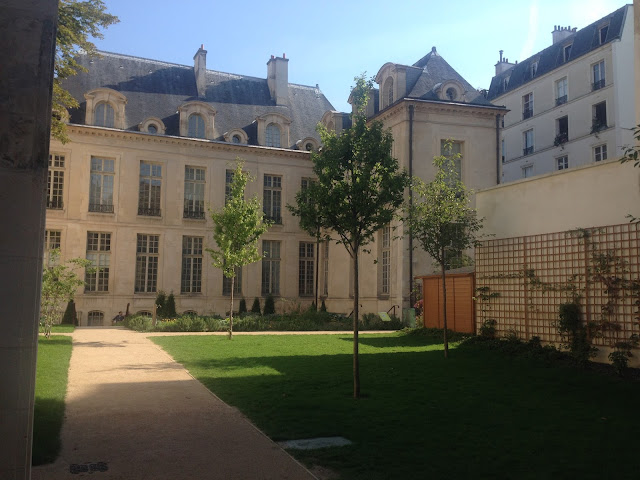 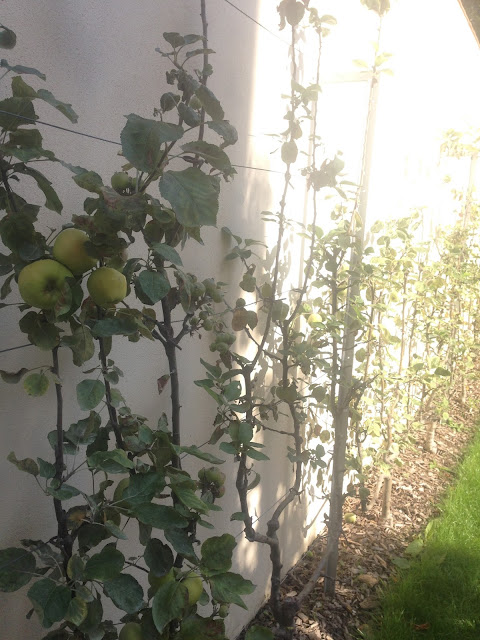 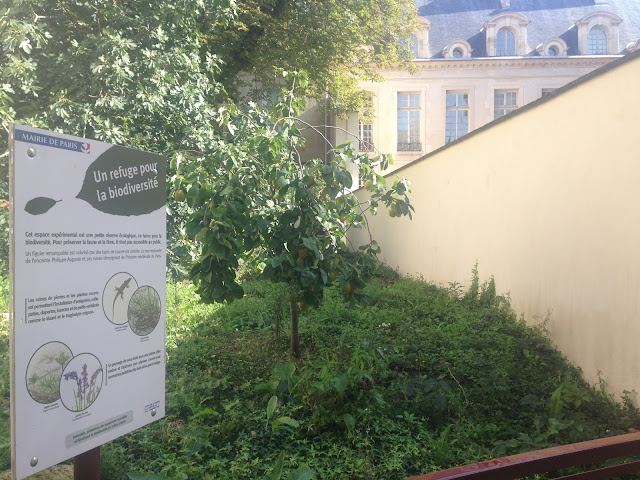 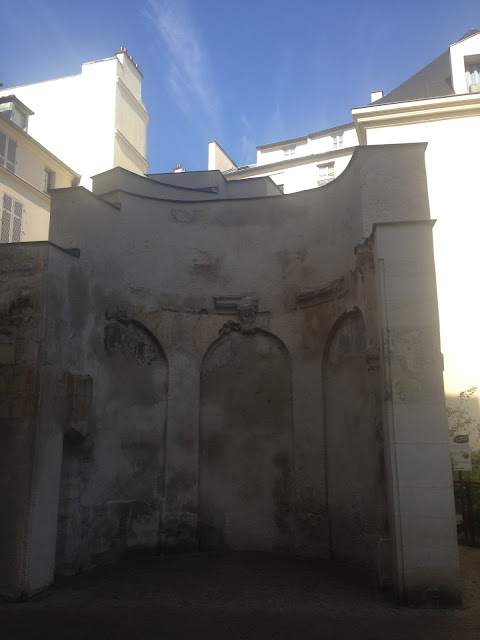 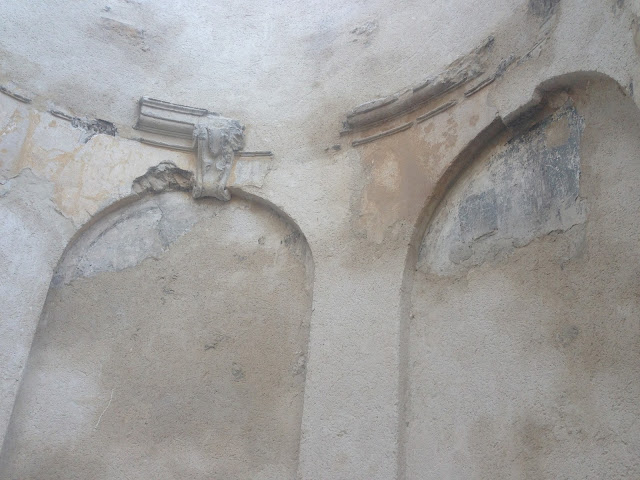 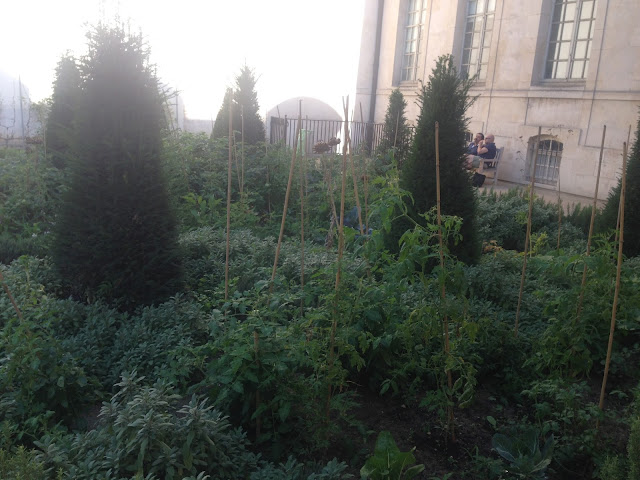 Le Marais is kind of like the Williamsburg of Paris in that it is home to many hipsters and orthodox Jews. Also like Williamsburg, it is getting fancier by the day. Also, I think the price of falafels went up (womp, womp). 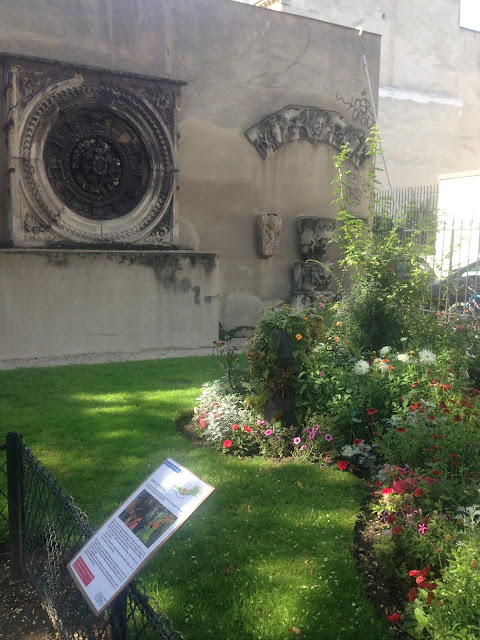 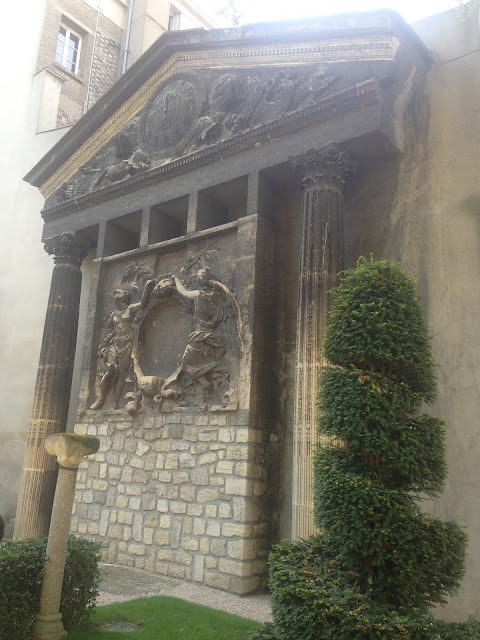 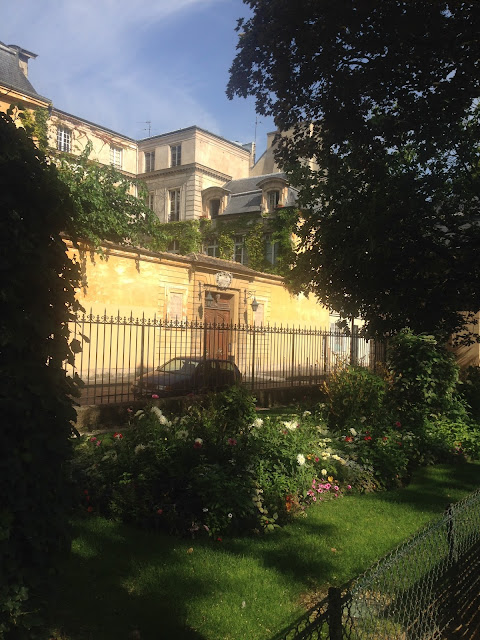 On the way home, I did decide to indulge my sweet tooth a bit in the spirit of discovery. "What is a 'chou'? ", I wondered many times as I passed the tiny shop La Maison du Chou. Well, now I know that it is a tiny pastry puff that can be filled to-order with an assortment of creamy fillings. I got the "classic", being a first-timer and all. 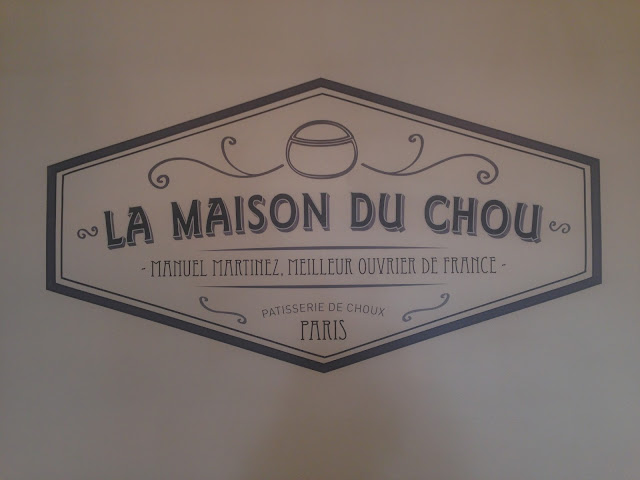 In French class back in the day, we learned that "mon petit chou" is used by the french as a term of endearment. We also learned that the literal translation of "chou" was "cabbage". I much prefer to think of calling my beloved "my little creampuff" rather than "my little cabbage" haha.

Fun times, but real classes start tomorrow and I still am not quite sure when and where all of them are (eek!). Back to the grind. Hope you all have enjoyed your respective weekends, as well!
Posted by Zee at 11:11 AM No comments:

Today marks the midway point of my grad program's Welcome Week! We've certainly hit the ground running. The program started off with a 2-day, 8-hour lecture (all in french) introducing us to legal theory in a french context, followed by the requisite campus tours, etc. The pièce de résistance so far has been a veritable blitzkrieg of a lecture on french civil procedure and the hierarchy of courts. When the professor asked at the  end of the lecture if everyone had understood what had been said, I heard a few mumbled, sarcastic "non"s  from some of the french grad students in the crowd, which made me feel a bit better about my own lack of comprehension.

Luckily, I don't need to know any of that! It's interesting, certainly, and a good opportunity to improve my "ear" for french, but I have no plans to practice domestic french law.  I'm looking forward to starting my global governance classes, which won't begin until next week. In the meantime, it's been fun to meet the other students in the program. As a whole, everyone has been a lot friendlier than I anticipated based upon my undergrad experience.  Many of the other students have been required by their undergrad programs to spend time abroad, so they remember what it is like to be the "weird foreign kid". I think I've also done a better job of not being so self-conscious. The other candidate here from my law school, Jon, has also been good about encouraging me to branch out and make friends.

School is nice, but man, I miss laying around and doing nothing haha. Vacation can't last forever, though.

Heyoooo mes amis! Zee is back, and back in action...in Paris! Fast forward to 2015: I am about to begin my third year of law school, and I will be spending it abroad in Paris, France as part of a program offered by my law school. This time, I'll be here for a full 9 months (mon dieu!) and I'll be in a Masters program at the same school I attended the last time around.

I arrived in Paris on the 11th of May after a brief layover in Iceland (more on that later) and I have been alternately sleeping/attempting to get my life in order/tourist-traipsing since. Some contextual updates:

-I am 25 now instead of 20, so more life experience under my belt (?)
-I've visited 6 additional countries since arriving in France back in 2011, which at that time was my first foray abroad
-I'm living sans-roommates within walking distance of school (no more madame-madness)
-I have spent the last 3 summers living and working in NYC for law firm internships

In terms of initial impressions, these are the thoughts which have crystalized so far:


I flew from NYC to Paris via Reykjavik, which was an interesting experience in and of itself. The flight itself was fine, even though the plane was a bit older, and the two adorable english tots next to me got moved to the back of the plane to be closer to their parents so MAMMA GOT THE WHOLE ROW TO HERSELF. You heard right. I was laid out.

The layover itself was perfect because it was just long enough to not have to run through the airport, but short enough as to not be annoying. I went to the bathroom-stay with me here- and I was pleasantly surprised to see that there were separate rooms rather than stalls with a shared trough of sinks.  Very much an Ikea-vibe to the whole setup, and the sink was a dual sink/dryer with these jet-powered hand dryer handles that stuck out from the water spout. 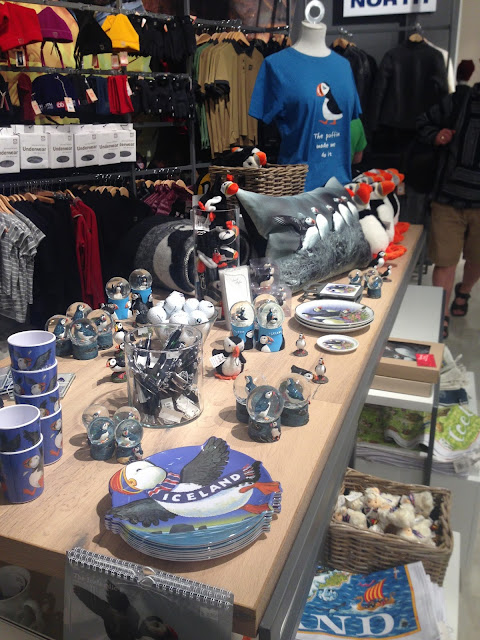 Landing in Reykjavik was an interesting experience in that the landscape looked like nothing I had ever seen before. It looked as though we were landing on a sheet of lava that had cooled maybe a year or two max. beforehand. Not a tree in sight. Scrubby little shrubs and moss were the only vegetation I was able to pick out. That said, the landscape was very beautiful. There were gorgeous mountains in the distance, and occasionally the sun would burst through the clouds in really beautiful sunbeams that would illuminate patches of the countryside.

Iceland Air was a cool experience overall (hehe puns) and I might try and take advantage on the way back of a promotion the airline was touting in which you can apparently stay in Iceland for a few nights for free during your layover.

During the layover in Reykjavik, I met a charming girl from Seattle that is doing an undergrad exchange program at the same french uni I will be attending. We shared a taxi into Paris, and it was so nice to relive old memories as I tried to give her some helpful hints from my undergrad experience.

My apartment is in a very "chic" part of Paris, as I have been told by a few Parisians I've met so far, and I innocently protest that I chose it for proximity to school. Though I have to admit, if you're going to do the Paris experience, you might as well go for it, and I'm glad I did. After a few unsatisfying experiences scrimping on housing, I decided to reallocate my budget to allow for nicer digs. I went through an agency, and I got a cute studio with gorgeous big windows.

I've been getting the lay of the land ever since which, thankfully, is very much familiar from last time.  I discovered a little popup resto in a courtyard near my apartment inside a building that during the school year is a catholic school for orphans. You can get various items such as wine and cheese plates, and there are occasionally live performances (I am aware of how "hipster" this sounds, and I don't care :p). I went there today with a Laduree goodie that I purchased. 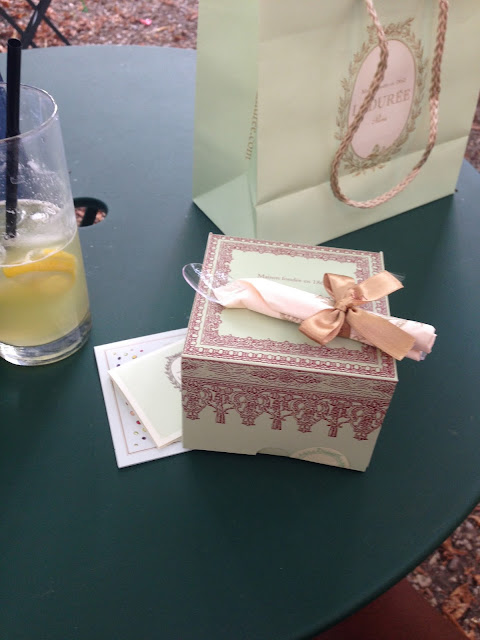 Still a lot of admin stuff to do, but all in all a good start to the experience. So grateful that apps like WhatsApp exist this time around so I can take calls anywhere I have a wifi connection, so I don't feel like I'm so far from home. Apologies for the long post! Until next time!