I was clicking through an article about Lupita Nyong'o's U.S.Vogue spread (which is beautiful, check it out) when I saw a line about how part of the shoot was shot at the Picasso Museum in Paris. I was a bit shocked to read this, because I had no idea that there was a Picasso museum in Paris. Not to say that my knowledge on Paris museums is exhaustive, but I do consider myself a lover of museums (a "museumophile", if you will) so I was surprised at such an oversight on my part.  Turns out, the museum was closed the last time I was here: it reopened in October 2014 after being closed for five years. I jotted it down in my little Paris journal that one of my best friends gave me on a page where I keep an ever-growing list of the places in Paris I'd like to visit. Yesterday I decided that it was as good a day as any to bike over (no rain!).

Let's just say that that day I learned an important lesson about keeping abreast of events in your city. As I walked down Boulevard Saint Germain to find a Velib' station, the scene kept getting weirder...heavy traffic, but hey, it was Saturday. Then police blocking off streets..maybe there's a foreign dignitary in town? Someone got out of a charter bus in the middle of an intersection and left it there...hey, when ya gotta go...Then, I kept seeing groups of "youths", some with paint on their faces, some with wigs. Next, a string of public transit buses parked in the middle of the street, driverless. Finally, I stopped at a shop to ask someone what was going on. "C'est la Techno Parade", they replied with a knowing smirk. Huh? Oh I was about to find out... 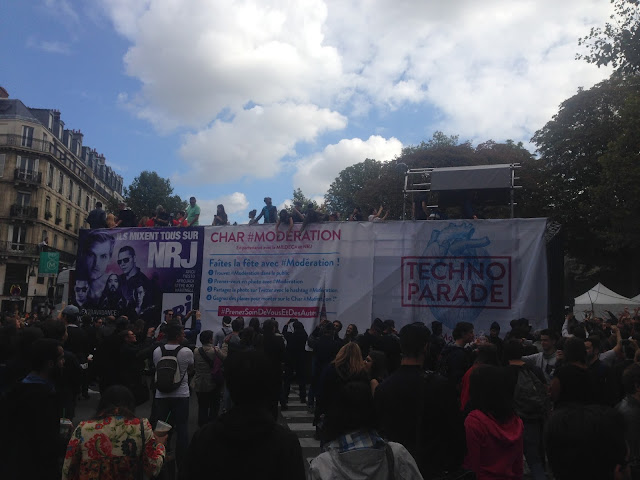 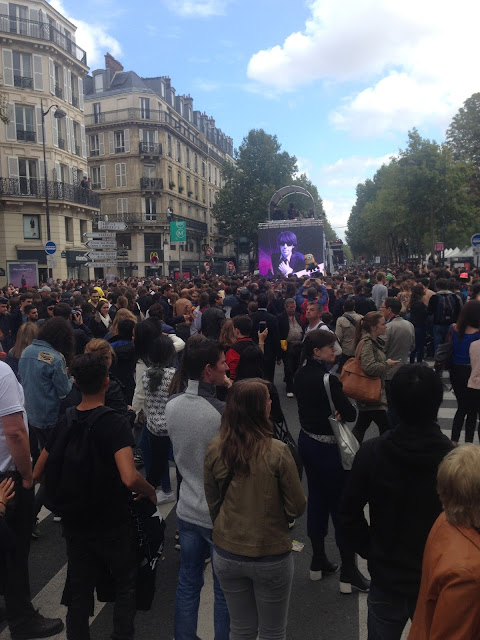 The parade consisted of large, tricked-out buses and trucks blasting techno music, each trailed by a band of merrymakers that would react appropriately each time the beat dropped. I found myself in an interesting position: mildly horrified at the kids gleefully swigging from liters of "coke" (surrree...), faces covered in "tribal markings" drawn on with lipstick, and amused at some the adults, unsure of which way to turn their expensive strollers to avoid the puddles of vom.

Am I old? Not too long ago, this would have been my kind of scene. Now, I'm standing here clutching my imaginary pearls, muttering quelle horreur.

Eventually, I was able to snag a bike and Premium Rush my way over to the right bank.

The Picasso Museum is cool. It doesn't have a super-recognizable, imposing facade like some of the better known museums; you have to enter a courtyard first to get in line and the museum itself still bears many of the hallmarks of it's past life as a mansion. I'd been to the Picasso Museum in Barcelona and I thought it would be fun to check this one out for comparison's sake. The layout seems to follow Picasso's development as an artist: Rococo ceiling moldings and grand staircases give way to minimalist white walls and stone ramps as you make your way up floor by floor. The layout gave me a much better perspective on Picasso's life, influences and artistic process. In addition to paintings and sculptures, there were "exotic" masks from Africa and Oceania, letters Picasso wrote during his stint as a writer and poet, and paper and wood models he made to inspire some of his cubist paintings. The top floor boasts an impressive collection of works by artists such as Cezanne, Matisse and Seurat, if Picasso isn't your thing.

Again, got in free because of my student id. I wish we had programs like this in the U.S., though I won't be able to take advantage of student discounts much longer... (eek!). But a good thing to implement for the next generation, no? 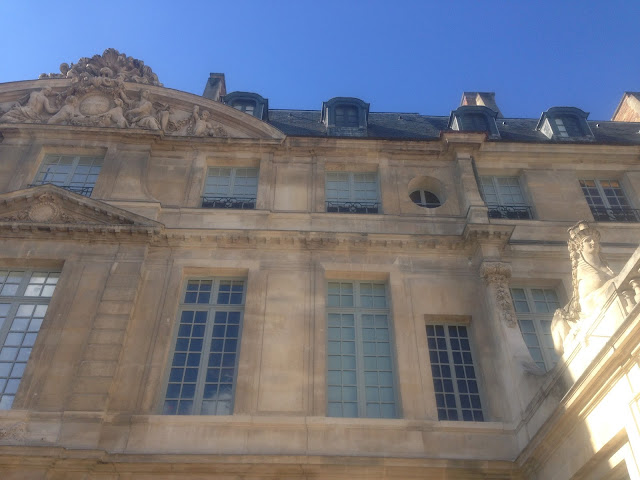 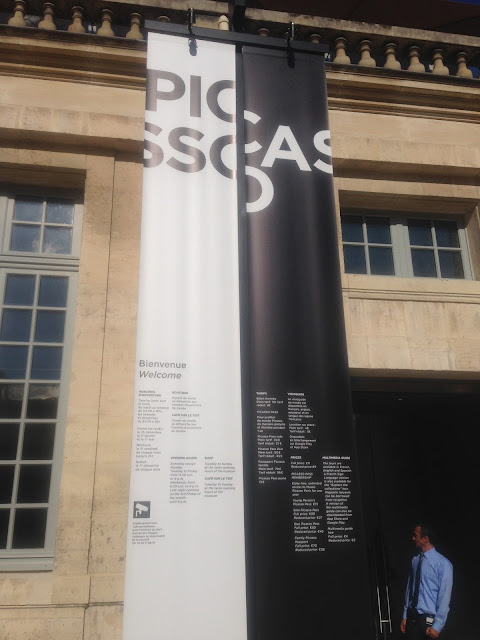 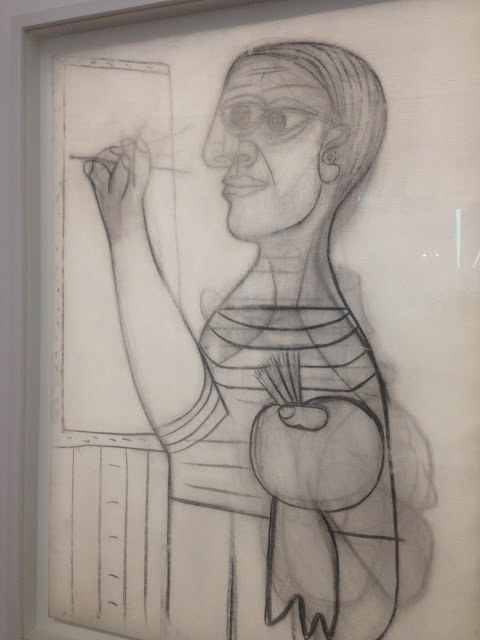 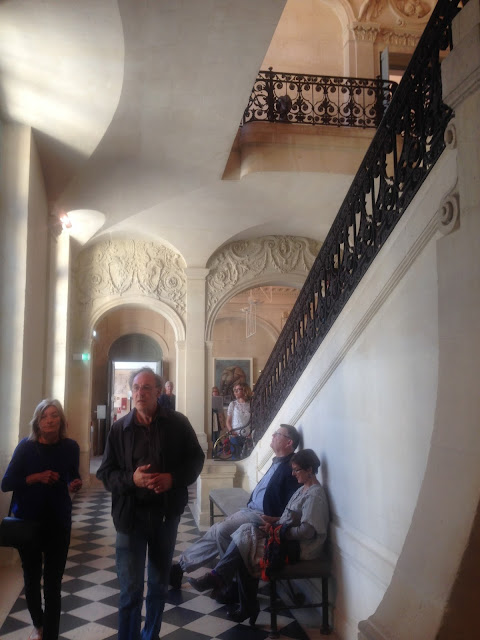 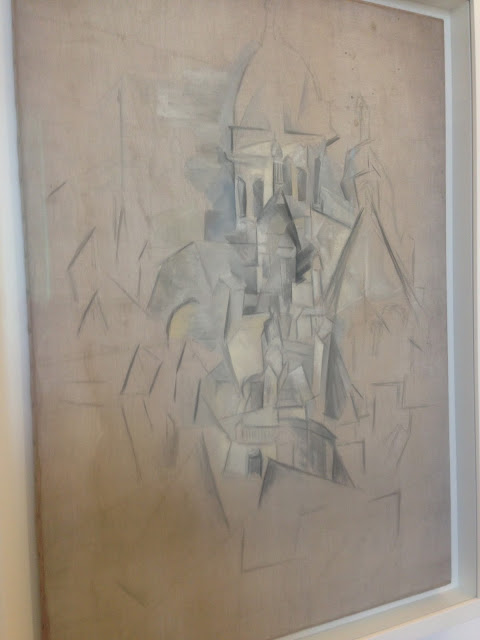 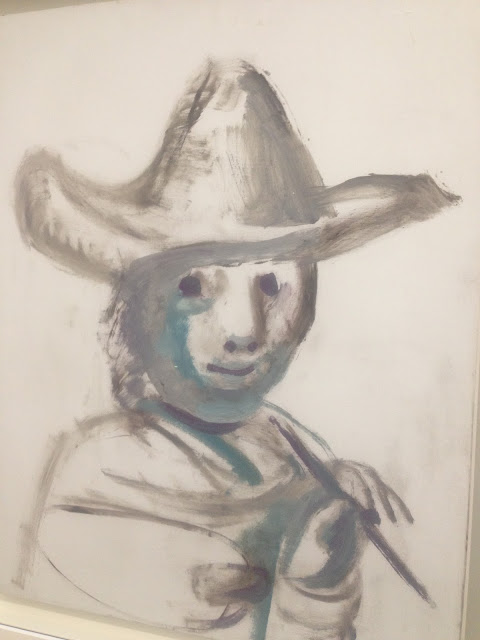 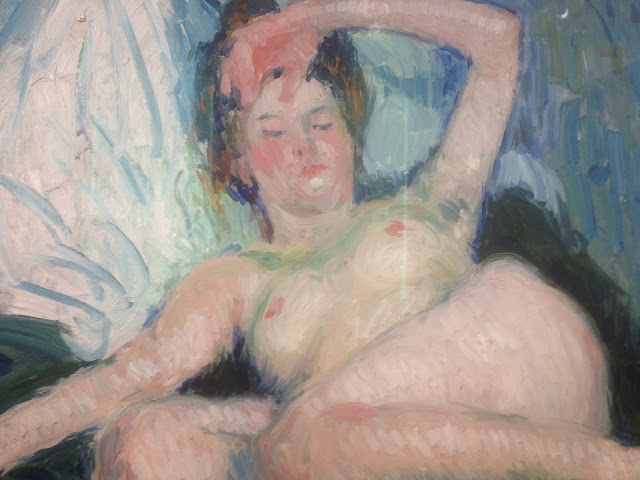 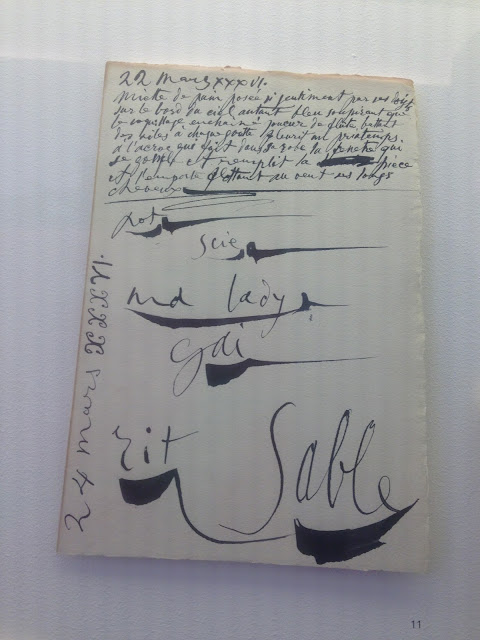 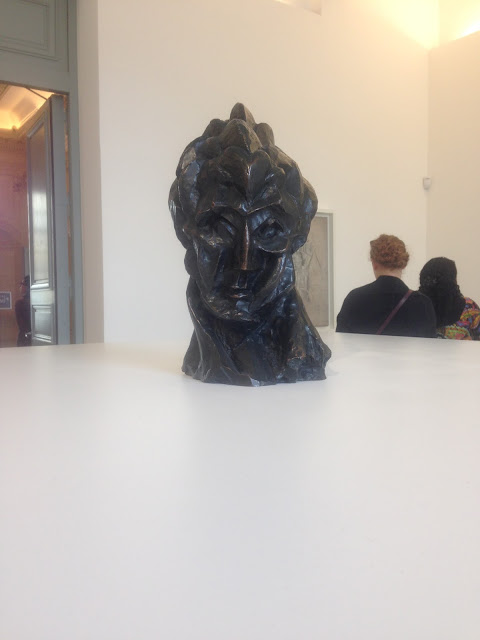 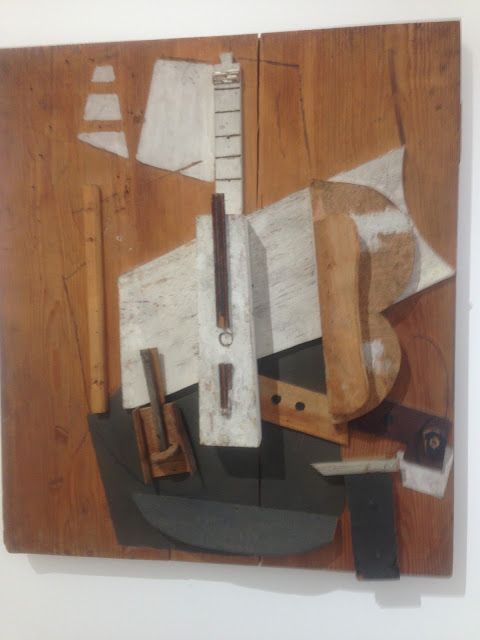 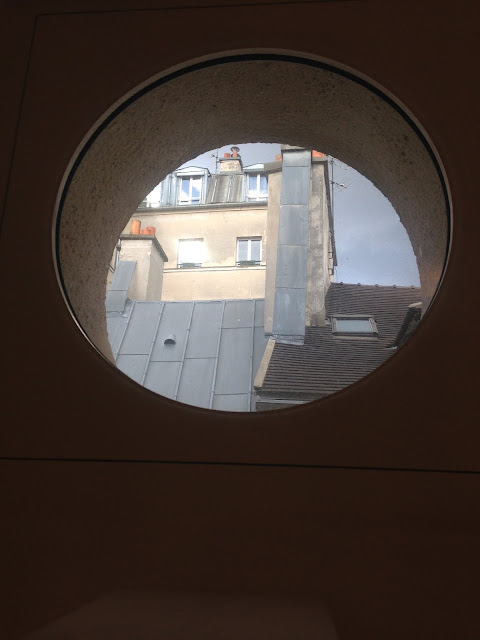 Salut! School is ramping up a bit (at the three-week mark now), so I haven't had as much time to post. Some quick updates:

I'm playing with a red lip, because pourquoi pas?
To further add to the "chou" confusion (see earlier post), I spotted some decorative cabbage plants at a florist near my apartment...

I made it back to Musée D'Orsay, and it was bomb per usual...


I love that Le Bon Marché and La Grande Epicerie are doing a Brooklyn theme... 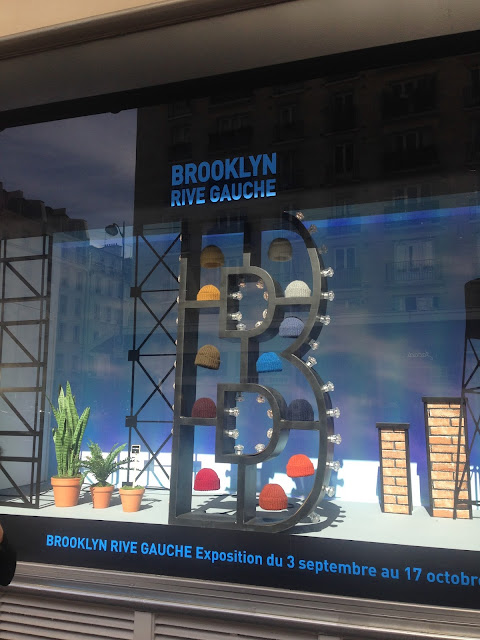 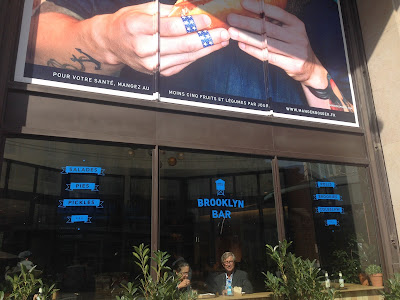 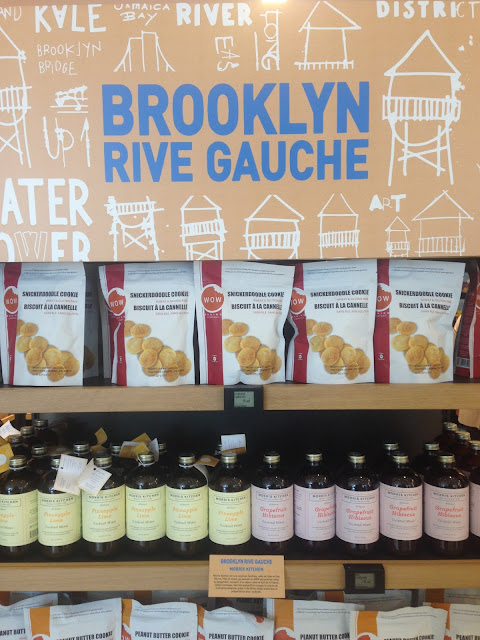 A fellow exchange buddy had a few of us over her place and it was so cute and Parisian... 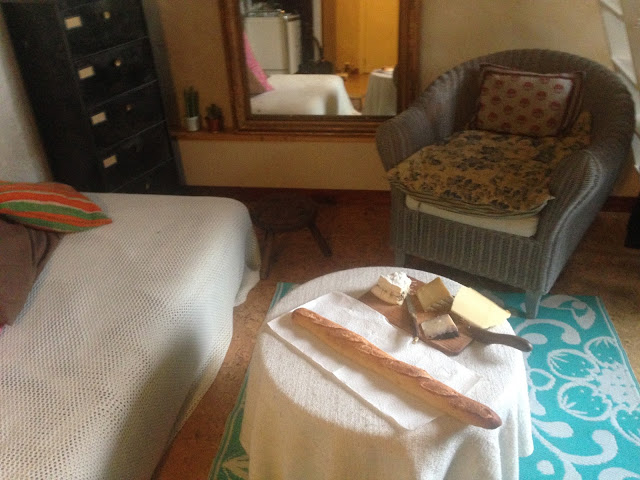 The weather is getting kinda crappy (rain errday), so I've been cooking... 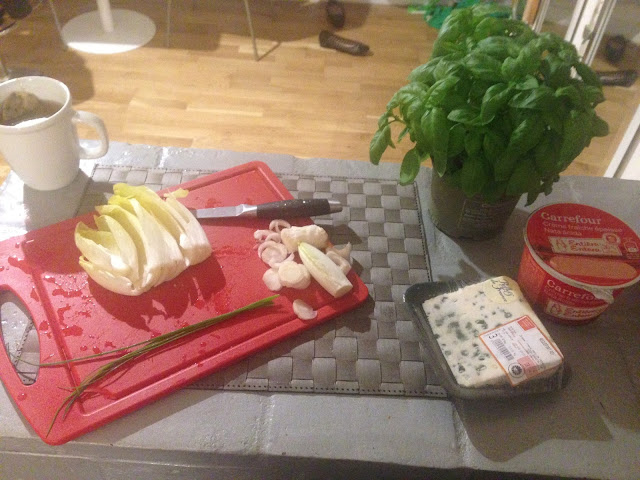 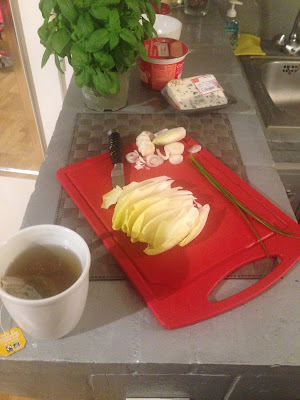 And there you have it. Next post will be more reflection-y and contemplative-y, I promise :)
À bientôt!
Posted by Zee at 5:41 PM No comments:

You Better Velib' It!

I live within walking distance of my school, so I decided to forgo getting a Navigo pass this time around and instead rely on Velib' for slightly longer jaunts within the city. It's much cheaper than even the year long student pass for the metro-ImaginR for 360 euro a year-totaling a measly 29 euro for one year. I picked up the express card from the local mayor's office here in the 6th yesterday, and went on my first ride this afternoon!

Velib' is the world's largest bikeshare scheme. The title is an amalgamation of the french words vélo (bicycle) and liberté (duh). There are Velib' stations all over Paris, each housing around 10 or so bicycles ready for rent. You can buy day passes, or do as I did and sign up for the year pass. Again, a measly 29 euro. If you're on the fence, DO IT! It's amazing. If you're a student, the first 45 minutes of use are free, and only an additional 1 euro for each additional 30 minute increment. I thought about buying a bike, but coming from the University of Southern California, I have seen more bikes stolen than I care to count, so I figured Velib' was a safer and easier option.

Being in law school, I have to add a disclaimer city biking is dangerous, and that you should make sure to learn the rules of the road and take proper precautions before you embark on any Paris biking adventures of your own. That being said...you totally should.

I activated my card at a Velib' station near my apartment and grabbed a bike. I opted for lucky no. 7, since it was my first time :). I haven't biked in forever, much less to actually GO anywhere, but like they say, you never forget how to ride a bike.

I was a bit wobbly at first, but luckily Paris is a very bike-friendly city. Most of the cars and mopeds gave me a wide berth, and I was only honked at once the entire ride. I was Eiffel Tower bound: I've been here for over three weeks now, and I haven't been anywhere remotely close. It was far enough, I figured, to be difficult to get to by foot but still close enough for my beginner status.

I picked up a map showing the bike traffic flow patterns for Paris (again, kiddies, take precautions!) and I decided to take the Seine route. It was a good decision. Super scenic...or should I say "seine-ic" hehehe. The weather was mild and traffic was relatively light. Perfect biking conditions. 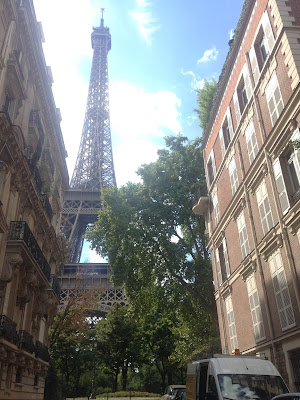 I reached the Eiffel Tower intact! And I even found a Velib' station to hook my bike back into before the 45 minutes were up. #winning.